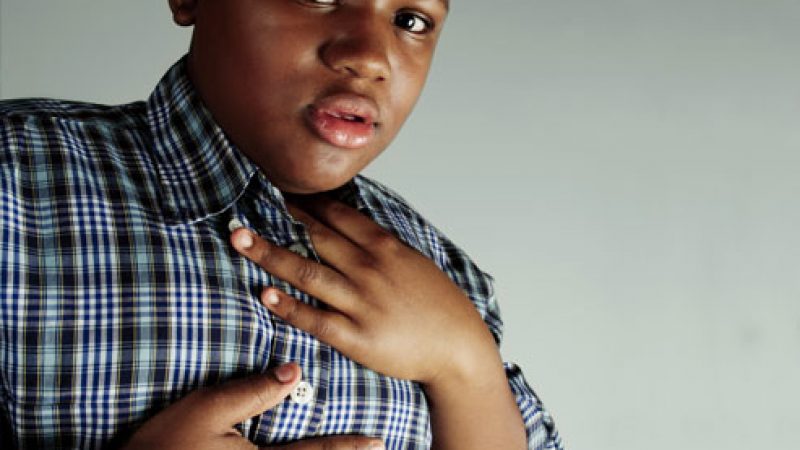 What happens in an asthma attack?

Because of asthma’s chronic, low-grade inflammation and irritation of the bronchial tube lining, airways can become “twitchy” and narrowed in response to certain triggers. During an asthma attack, the muscles that surround the bronchial tubes contract, further narrowing the air passages.

With worsening of asthma, inflammation of the lining of the airways increases and produces swelling and further reduces airway size. In addition, glands in the lining of the air passages secrete excess mucus that accumulates in the already narrowed air passages. Air is trapped behind the narrowed bronchial tubes and there is a decrease in the oxygen available to the body. The result is that breathing, especially exhaling, becomes extremely noisy.

How long does an asthma attack last?

The duration of an asthma attack can vary according to the type of trigger that caused it and how long the airways have been inflamed. While mild episodes may last only a few minutes, more severe episodes can last from hours to days. Mild attacks can resolve spontaneously or may require medication. More severe attacks can be shortened with appropriate asthma treatment.

What should be done during an attack?

Always follow the instructions of a physician. People with asthma should have an action plan for dealing with an acute attack. In general, it is important to stay calm and take prescribed medications. Quick-relief medications, including short-acting, rapid-onset inhaled beta2-agonist bronchodilators, anticholinergics and systemic corticosteroids are used to treat asthma attacks and are taken on an as-needed basis. They relieve symptoms rapidly by relaxing the muscles surrounding the airways, helping to open the bronchial tubes.